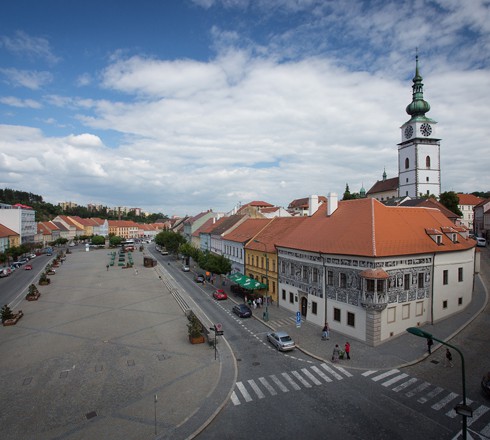 Its area of 2.2 hectares makes it one of the largest squares in the Czech Republic. It is decorated with three renaissance houses, in the middle of the square there is the statue of St. Cyril and Methodius. The square serves as a place of markets, fairs and various folk festivals and cultural events.

The extensive marketplace was founded at the turn of the 1260s and 1270s. Around the gradually expanding city, in 1335, stone walls were built, supplemented with moats, defensive bastions and outposts. The promising development of the Gothic town went to rack and ruin in 1468, when the city was destroyed during the wars between George of Poděbrady and Matthias Corvinus and burnt down by Hungarian troops.

On the ruins, the locals built a new town, this time in the Renaissance style. However, a number of devastating fires left their marks, the largest of them in 1822 destroyed the vast majority of the town, including the top of the town tower. Renaissance shields had to be torn down because of the risk of accidental fall. Only the sgraffito decoration of three houses remained. Until 1887, there used to be three fountains on the square.

Guided tours are organized by TIC Národní dům. Guide service is provided within the opening hours of the TIC Národní dům on the basis of a previous order.